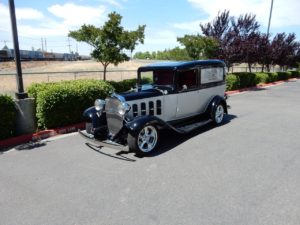 Tom and Dana Bice of Auburn, CA, started this project 6 years ago, when a huge crate arrived from Akron, Ohio.  The project was a bigger challenge than advertised. It was a P.O.S. according to Tom. They have built 15 cars in the past, all work done was by Tom and Dana. (Three of them were 1957 Chevys). So far, they’ve put only 10 miles on the 1932 Chevy Sedan Delivery. Tom installed a Heidts front end, a LT-1 Bowtie V8, hooked to a 4L60E transmission that pushes the horsepower to a 2002 Camaro rear end.  This rare hot rod sits on an air ride system.  The only part of the build that was farmed out was the upholstery.  Jerry Schudy of Citrus Heights, stitched up the award-winning interior.  Also, check out those rear lights on the top rear of the sedan delivery. These are quite difficult to locate since only six sedan deliveries were built by General Motors.  Tom painted the truck with Summit “mail order” metallic black and silver paint. As you can see, it is a flawless paint job. 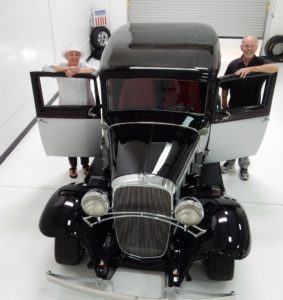 Tom and Dana are planning a trip to Reno next month to the Hot August Nights car show.  I’m sure that they will rack up awards for this “home built” Bow-Tie. When I pressed Tom about what’s next, he whispered, so that Dana couldn’t hear, a 1950 Chevy Torpedo back … the “Chevy heart beat” continues in the Bice’s Auburn Hot Rod Shop! When I asked about what was the toughest part of the build, Tom said, that it took 8 steering columns to get one that worked! It was fun visiting with Tom and Dana at Bill Smathers’ “B & L Clear Bra Rocklin Studio,” where we photographed the Chevy.  Tom also heads up the local Chevy Club.  Tom’s club volunteers each year at the Sacramento Autorama. They wear the “Go-To-Guys” T-shirt helping direct the entries and the set up at several of the buildings at Cal Expo.

Want your car featured in the Cruisin’ News? Call my office at 916-764-0700 or email Cruisinnews@mac.com